Initiative is part of long term strategy for sustainable growth

Harvey B. Gantt Center for African-American Arts + Culture launched a new advisory board on Saturday, May 19, 2018. The group consists of thirteen young entrepreneurs and professionals who will lead efforts to attract millennial patrons to support the Gantt Center and African-American arts and culture. Millennials are defined as being born in the early 1980s to early 2000s. Led by Charles Hands III and Marcus Howard of the local consulting firm Engage Millennials, the inaugural meeting provided participants with an in depth history of the Gantt Center’s legacy as a Charlotte institution followed by training on the role of the advisory board. 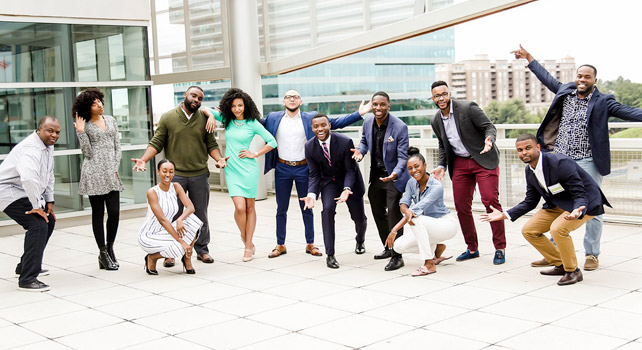 The Millennial Advisory Board (MAB) will work closely with Gantt Center leadership to build community among Charlotte’s millennial demographic and develop messaging that resonates with them. “As the city of Charlotte continues to attract more residents in this demographic, it is imperative that we incorporate the innovation and vision of these young leaders,” said Gantt Center President & CEO David Taylor. “It is easy for older institutions to become irrelevant without a shift in vision. We appreciate Charles and Marcus for taking such an interest in preserving our legacy,” Taylor also said.

Through intentional communications strategies, the MAB will provide insight into initiatives and program offerings to attract new visitors to the Gantt Center. "The Gantt Center serves as a community epicenter for African-American art, culture, and community outreach, said Engage Millennials co-founder Charles Hands III. "With Charlotte being named the top destination in the country for millennials, we intend on connecting our generation to the Gantt Center to preserve the institution's rich legacy for future generations."

ABOUT HARVEY B. GANTT CENTER

The Harvey B. Gantt Center for African-American Arts + Culture is a multi-disciplinary arts institution located in the heart of Charlotte, North Carolina. Founded in 1974, the Gantt Center’s mission is to present, preserve and celebrate excellence in the art, history and culture of African-Americans and those of African descent through visual and literary arts, dance, music, film, educational programs, theatre productions and community outreach. The Gantt Center features fine art exhibitions from around the world and is home to the nationally celebrated John and Vivian Hewitt Collection of African-American Art, which was generously donated by Bank of America, and is accessible online.