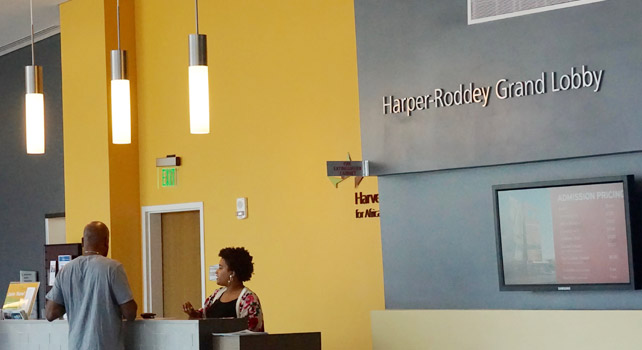 The Harvey B. Gantt Center for African-American Arts + Culture honored its founding mothers Dr. Bertha Maxwell Roddey and Dr. Mary T. Harper in a private reception on Wednesday, August 22, 2018. Dr. Maxwell Roddey and Dr. Harper were recognized for their role in establishing the institution almost forty-five years ago as a place where the public could celebrate African-American history and culture through exhibitions, performing arts and educational programs. A major highlight of the evening was the re-naming of the Gantt Center’s second floor lobby to the Harper-Roddey Grand Lobby, which was unveiled during the event. District 2 Council Member Justin Harlow read a proclamation declaring August 22, 2018 Harper-Roddey Day in Charlotte and Mayor Vi Lyles gave closing remarks.

Dr. Harper and Dr. Maxwell Roddey met at the University of North Carolina at Charlotte where they joined forces to create the Charlotte-Mecklenburg Afro-American Cultural & Service Center in 1974. Their unparalleled dedication to the community has allowed them to achieve other prestigious honors including North Carolina’s Order of the Long Leaf Pine award.

“Because of the vision that Dr. Maxwell Roddey and Dr. Harper put into action, the Gantt Center now stands as a beacon in Charlotte to showcase the culture, the history and creative ingenuity of the African-American community and the African diaspora. Renaming the lobby in their honor enabled us to honor them and say thank you for initiating the pathway that allows us to serve the community now, and for generations to come,” said Gantt Center President & CEO David Taylor.